In 2007 Dino, Bootle, MadraRua and myself took a ramble with RTE Nationwide in Donegal

In April 2005, Anna Carey from The Irish Times headed off in search of her first geocache. She was joined by Donnacha, MadraRua, The Windsockers and Bootle. 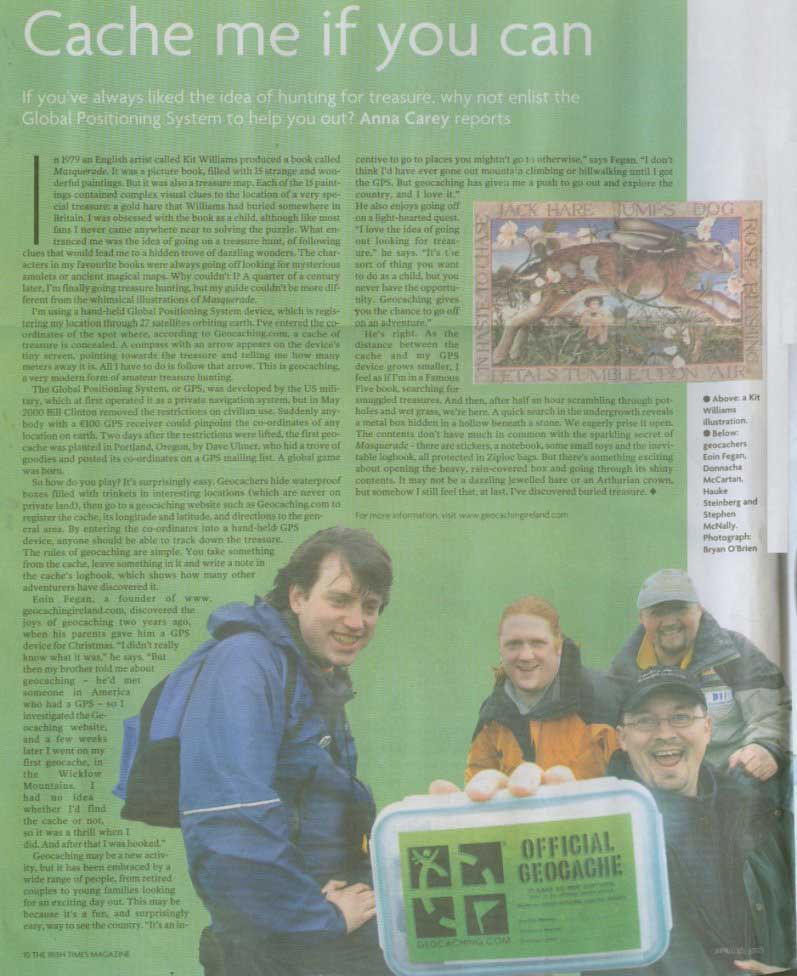 In February 2005 we were contacted by Philip O’Reilly, a coordinator for the Festival Of Science in Dublin. Philip wanted help in organising an event for the festival the following September that involved Geocaching. After a lot of hard work from members of the Geocaching Community, the event was a great success. The following piece was written by one of the BA Science volunteers.

Adventurous members of Dublin’s public took part in a treasure hunt with a twist on Sunday afternoon as part of the annual BA Festival’s Science in the City programme. The event used the latest global positioning (GPS) equipment to track a trail around some of the city’s famous historical, cultural and scientific monuments.

There was a great sense of excitement as around forty intrepid explorers of all ages met up in the bustling Temple Bar square and split up in to teams of around five people.

Once in their groups, volunteer GPS experts showed the teams how to programme a waypoint (a set of co-ordinates) into the system. The teams set off around the city tracking a specific waypoint, and at each monument a clue was solved to unlock the next waypoint.

The trail led the teams around sites such as Dublin castle, Trinity College and St. Stephens Green admiring famous former Dublin residents such as the Sir Richard Griffiths, the ‘Father of Irish Geology’.

GPS systems work by receiving signals from satellites. Around 12-18 positioning satellites have been put up by the military and around 3-4 are available for public use.

With a clear view of the sky, a signal is beamed down to a mobile phone-sized device. Once the waypoint is programmed into the system, the direction of that co-ordinate is displayed on a compass on the screen of the device. Other information such as the distance, time and speed are also displayed on the system.

The event was organised by Geocaaching Ireland, a society whose members regularly go on trails similar to this. Geocaching normally involves the discovery of one waypoint where an object may be found, usually in the form of a logbook but sometimes a treasure or trinket for the person who finds it. This leads people not only around cities, but often into the countryside. ‘It takes you to places you never new existed,’said Fjon Klein, a member of Geochachinf Ireland and a volunteer team leader at the treasure hunt.

The final waypoint led the groups to a pub where the teams relaxed and enjoyed chatting about their adventures. ‘This treasure hunt was quite extraordinary,’ said Patricia Olbert, who took part in the event. ‘We didn’t know what it was about when we started but have met some great people and now we know how to use the GPS systems.’

Prizes were given to the teams that completed the trail in the fastest time. The team that finished first, with a time of fifty minutes, were lucky enough to win a set of GPS equipment.

When Donnacha received a phone call from a “German TV Director” wanting to make a documentary on Geocaching, and wanting to film it in Ireland with our help, the cynics amongst us here at Geocaching Ireland had a good hearty laugh. A documentary about Geocaching? In Ireland? Unlikely! It had to be Klaus having a laugh at our expense. Surely he had asked one of his German relatives to ring Donnacha and excite him with tales of interviews, a camera crew, and ultimately, fame on the continent. However over the course of the next few weeks, several authentic looking emails and phone calls originating in Germany, combined with extensive Googling on our part led us to believe that the whole thing was actually going to take place! We learned that ARTE, a multilingual TV company based in Strasbourg, was filming a series that would be broadcast both in France and Germany. The theme of the series was hunting in Europe. Previous episodes had covered elk hunts in Scandinavia and the capture of wild birds of prey in Italy. Ireland would be the scene for a slightly more animal friendly type of hunting – treasure hunting! We decided that it would be best to bring the crew to a couple of caches in Wicklow, as they would be within easy reach of Dublin, where the crew would be staying, and would also offer excellent scenery for the documentary makers to show to our continental brethren (we’re still waiting for the cheque from Bord Failte!). We chose Peat Hags Perch and the recently placed August and Everything After. The walk would take in Djouce mountain, the Powerscourt Waterfall and large amounts of nice green forest.

The day before the caches were to be visited, Bootle, Donnacha and the TV crew converged on Donnacha’s house to film the planning of a caching trip. Our fears that we might appear somewhat leaden in front of the camera, and would be stuck for words, were unfounded as we prattled on about various aspects of caching, maps, equipment, etc. for a good hour. Donnacha was a natural!

The following day Klaus, Kyle, Bootle and Donnacha were joined by a couple of non-cachers out for a stroll, as well as the film crew. Our plan was to head up to the summit of Djouce first and find the August And Everything After cache, then head down again and get the Peat Hags Perch cache. We met at the designated spot and were filmed making over-elaborate greetings and plans. The dialogue was a bit forced at first – “Hello. Donnacha. How. Are. You. Lets. Look. For. The. Cache.” – but we soon became used to being filmed, and headed off through the forest. 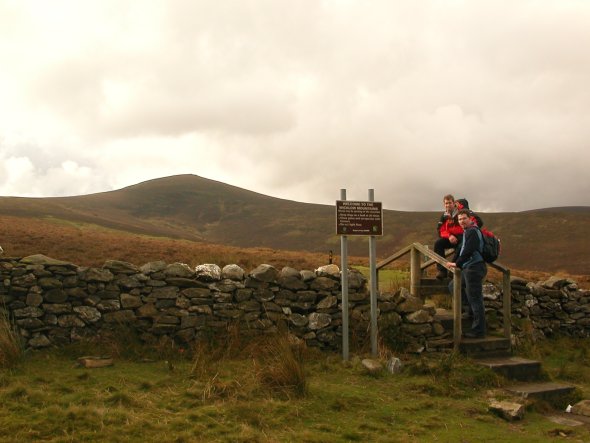 With the cameras rolling we were filmed walking through forests, across streams and over styles. Bootle was filmed unsuccessfully trying to untangle his GPS from his backpack. Klaus talked of male cachers being interested in “finding the box”, which raised a chuckle amongst the more immature members of the group. Donnacha, ever the professional, never even fluffed his lines once. As we neared the summit of Djouce we got caught in a low cloud which made the whole treasure hunting aspect of the afternoon quite exciting. When we located the cache, much time was spent filming the processes of finding, examining, exchanging, signing and hiding the cache. When that was finished we noticed that we were basically standing in a cloud and were freezing! We beat a hasty retreat to the base of the mountain and had a relaxed lunch. 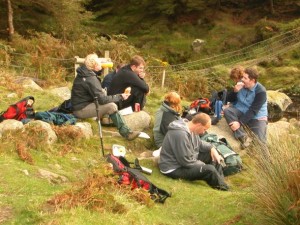 After lunch we all headed through the forest to the nearby Peat Hag’s Perch. The tall undergrowth made for some interesting jungle documentary type shots. The much falling over and slipping made for some less interesting Benny Hill style shots. I’m intrigued as to which will feature more prominently in the documentary! Kyle located the cache and we were interviewed about how we felt to be finding it. As nearly all of us had found it before, we did our best to feign surprise and joy! Once the cache was replaced, all that was left was for us to head back to our cars and be filmed driving off into the sunset! 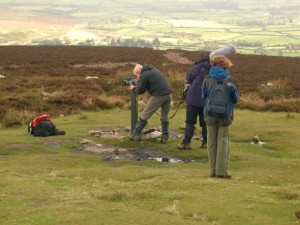 All in all it was a great day. We met some interesting people and had good fun – which is really what geocaching is all about. Hopefully some of that came across in the documentary.

Many thanks to Christianne from ARTE for showing the initial interest in caching and making contact with us. A big thanks also to Mick and Steve for doing the sound and camera.

Have a look for yourself…..

During the Spring of 2004 I cornered the then owner and editor of Outsider Magazine in McCoys in Larragh. Outsider was relativity new to the shelves at that time and I eased into the conversation by congratulating him on a top notch publication. After a few minutes chatting I explained the concept of Geocaching and asked would he be interested in doing a small piece on it.

So in September 2004, Colm from Outsider joined myself and Bootle in search of a cache on the Fancy Mountain. The piece turned out to be a full two pages and was a great introduction to Geocaching for the readers of Outsider

Many thanks to Damian, Colm and the Outsider team. 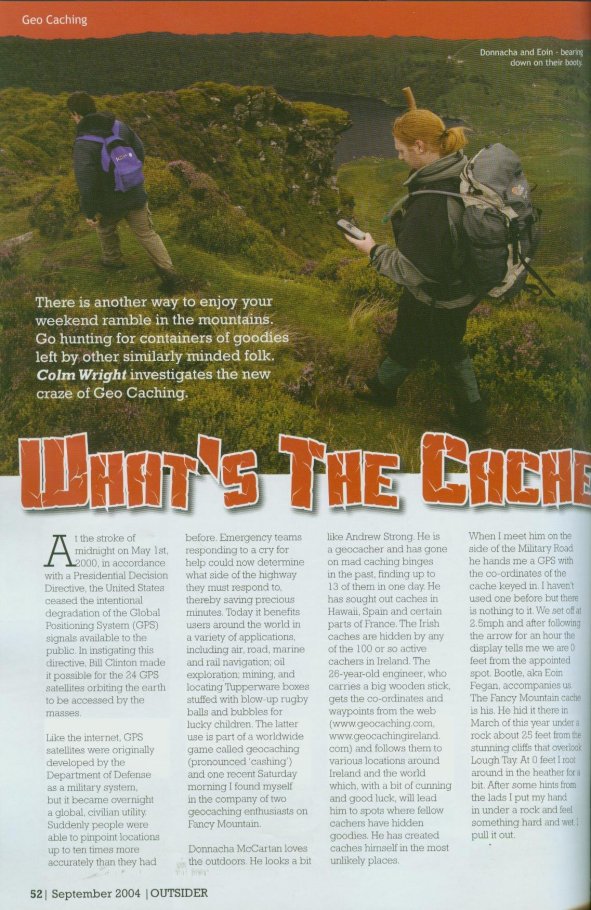 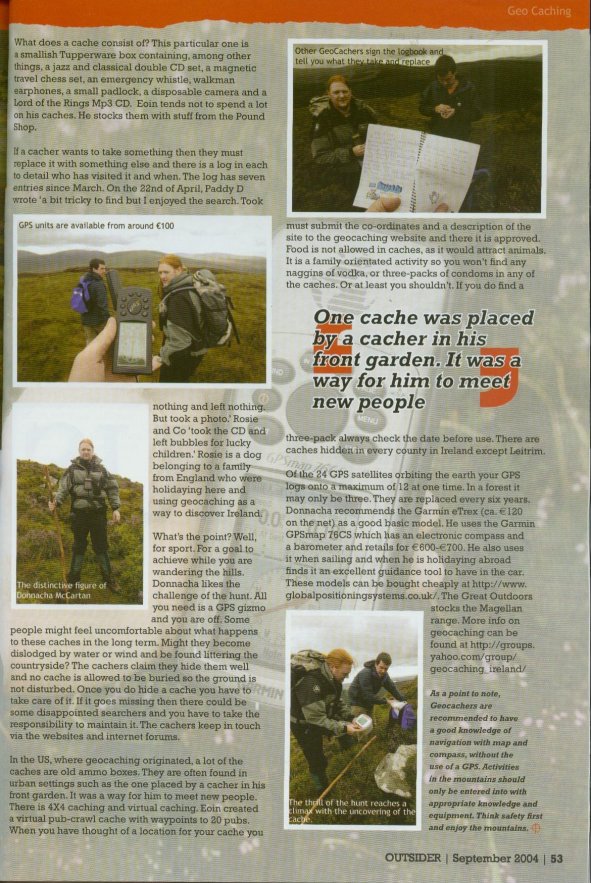 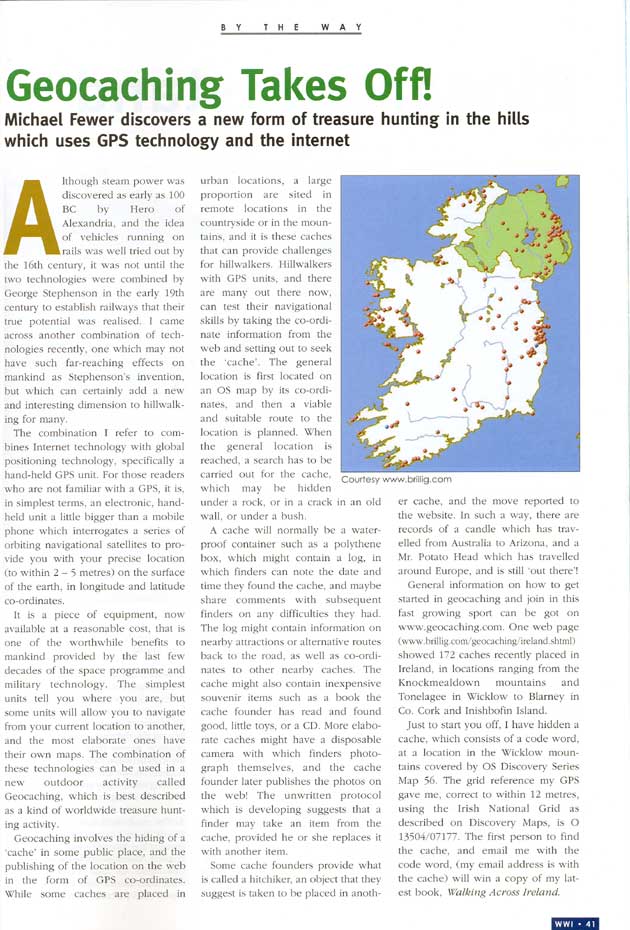